The prior Policy Statement was antiquated and dated back to an era when field collecting by hobbyist was not entirely discouraged. A new Statement was drafted that expressly discourages all field collection except for limited scientific stud- ies, rescue operations, government sanctioned breeding programs and the like. The new Statement directly references and incorporates the IOS Code of Conduct). Important legislation (The America Endangered Species Act) and treaties (CITES) are expressly referenced. In short, the Conservation Policy Statement is taking a strong stand against the sale and showing of field collected plants.

The Cactus and Succulent Society of America (CSSA) is the national organization for the study, education, and promotion of cacti and succulents. The popularity of cacti and succulents, their availability online, and their increased monetary value have critically endangered their populations in the wild. The conservation of these unique plants and their habitats is of critical concern.

CSSA shall adhere to:
• All national and international guidelines, treaties, and laws regarding the protection of cacti, other succulents, and their habitats.
• The Convention on International Trade of Endangered Species (CITES) treaty and the American Endangered Species Acts for both plants and animals.
• The International Organization for Succulent Plant Study (IOS) Code of Conduct.
• Specific conservation policies of the applicable State or other local jurisdictions.

• CSSA will not accept field collected plants in its competitive shows; plants in question will be evaluated by a review team upon entering.
• CSSA functions will not allow the sale, purchase, or promotion of habitat-collected plants.
• CSSA encourages its affiliate societies to adopt or incorporate CSSA Conservation Policies in developing their own missions and show and sale policies.

• CSSA endorses and promotes vendors which produce sale plants from seed, cuttings or other artificial means.
• CSSA discourages the use of nurseries and online vendors that sell field collected plants.

• CSSA will work with our appropriate government agencies to modernize laws regarding the sale of plants across international borders, especially for hybrids.
• CSSA will endorse and promote state laws and policies pertaining to the rescue of plants due to urban or agricultural encroachment.
• CSSA will assist in the development of procedures to conserve and disseminate rescued plants. 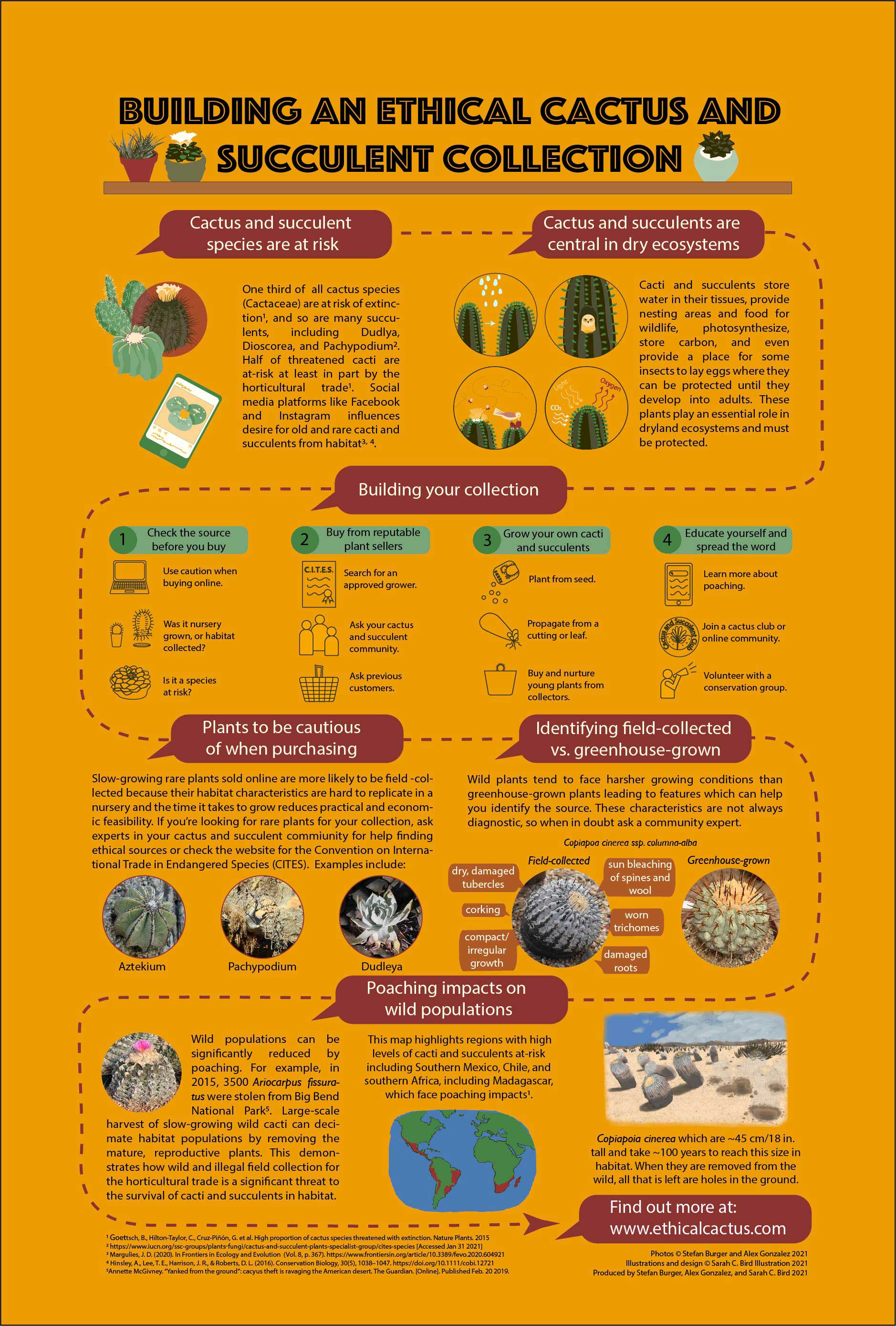 Dioscorea mexicana is a popular and highly field collected caudiciform. Most of these plants die within a year due to having their extensive root system removed for easy shipping, and their sensitivity to environmental changes.
They are slow growing, and almost non-existent in cultivation from seed due to the prevalence of field collection. It is not profitable for nurseries to compete with cheap field collected specimens.
Some information shared by experienced growers and nursery owners:
- Survival rate of field collected mexicana is extremely low. More often than not, a vine will grow from caudex for a year or 2 but never fully root, and and then die.
- The voyage from field to customer is extremely traumatic.
s - They are slow growing, same growth rate as D. elephantipes. It is estimated to take 50 years to grow 12 inches across.
- D. mexicana is more difficult to grow than elephantipes because they are more sensitive to environmental variations in cultivation.
- As of 2021, there are only very small numbers of D. mexicana that growers are trying to develop from seed for future distribution to relieve pressure. At best, it will be several years before they are publicly available.
- An experienced nurseryman started cultivated D. Mexicana. After growing a flat of 200 in one year, they are size of a small marble.
- A way to differentiate field from cultivated D. Mexicana: The edges of the bumps/fissures on the field collected plants are smooth from being weathered. They would be well defined in cultivation (angular and protruding, like seen in cultivated D. elephantipes).
- Locals are paid very small amounts of money to extract them from habitat. It is not enough to sustain them or improve their quality of life. The majority of profits go to resellers who take advantage of new buyers. 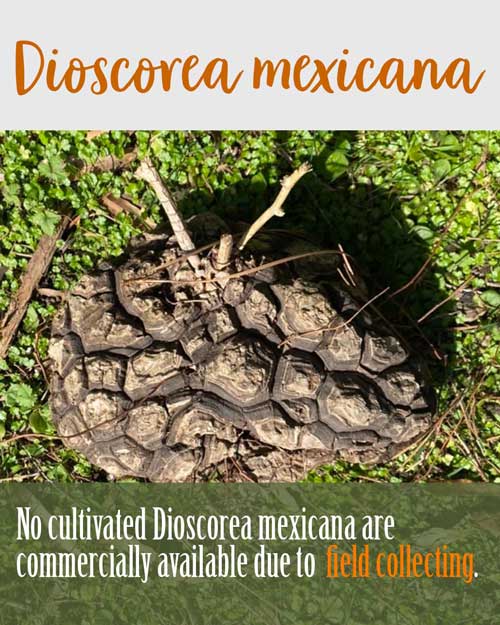 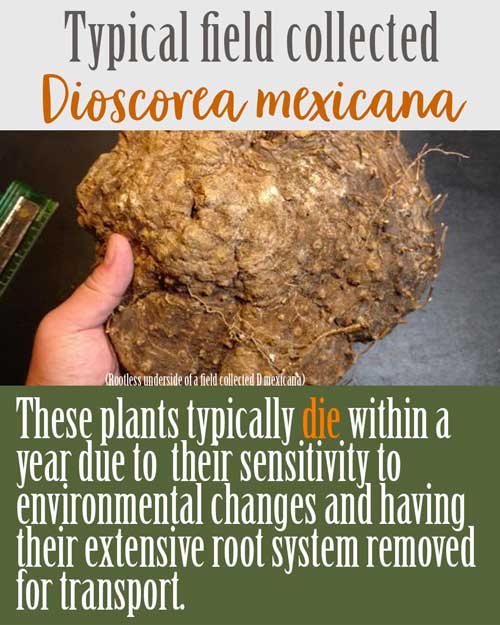 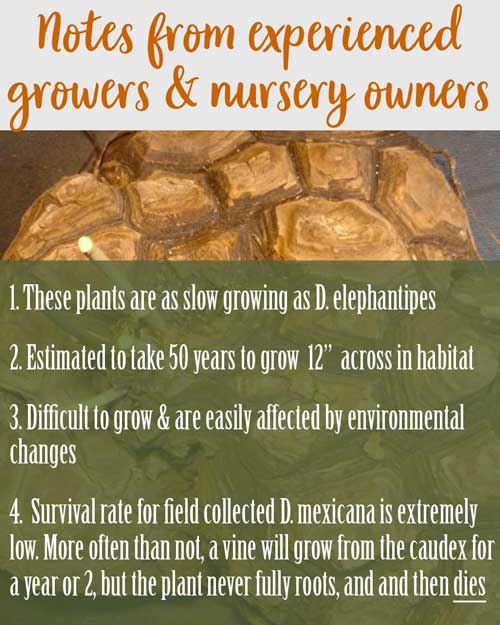 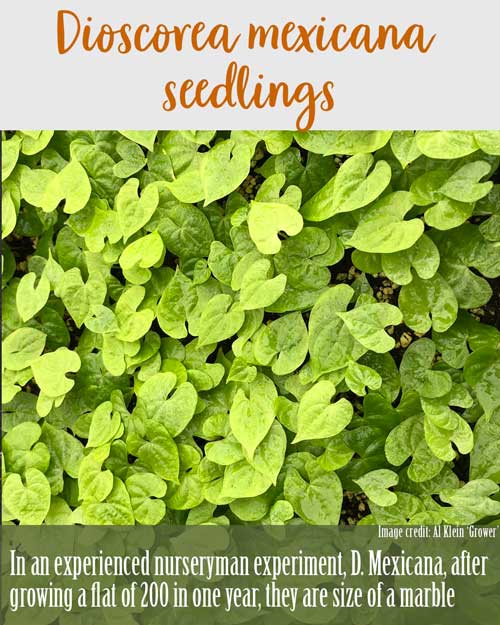